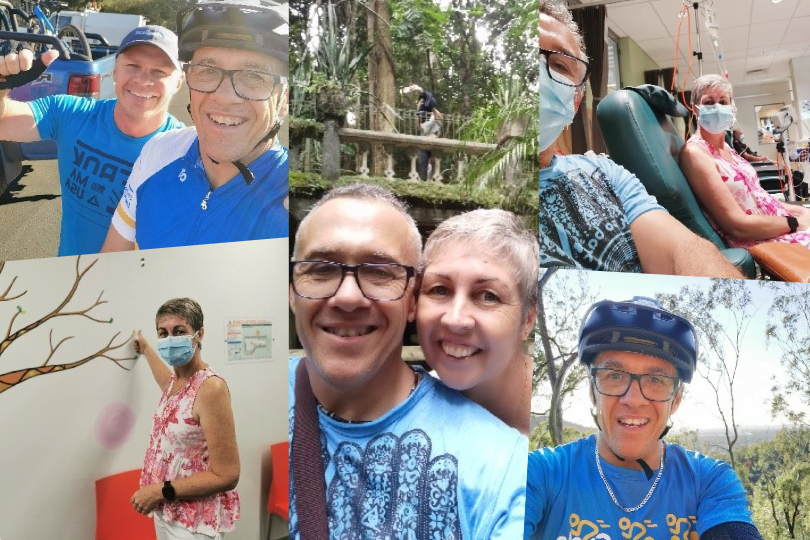 Truth be told, cancer has put Kylee and Jason Archer through the wringer.

Kylee’s diagnosis has beaten them up and battered them around. Physically, mentally, psychologically – it’s taken its toll. On their kids Cohen, Kaitlyn and Georgia too – try as they might selflessly attempt to shield Mum and Dad from the bulk of their own fears and concerns.

Through Cycle for Cancer – Kylee and Jason are fighting back.

Kylee, 50, and Jason, 51, are thick as thieves. Soulmates, fixtures of the Emerald community for over 27 years, and in this battle together every step of the way.

Kylee’s initial cancer diagnosis on 5 August, 2019 was a bolt from the blue. Stage four kidney cancer that had spread to her lungs.

She underwent an operation to remove her kidney in Brisbane, began immunotherapy a fortnight later, with over two and a half years of ongoing treatments at Mater Rockhampton to follow.

Last year, while Kylee was still amid her cancer battle, Jason signed himself up to Cycle for Cancer - aiming to ride 100ks in 7 days and raise $500.

It took Jason less than an hour to smash his fundraising goal. He’d passed $1,500 within a few days. And his 100km target went out the window too.

“I was looking for something to give back to cancer,” Jason said. “I saw Cycle for Cancer – how it was going back into research and for us, with this journey we’d just been through, it was the right fit for us.”

Without a connection to cancer prior to Kylee’s diagnosis – the advances in research has really struck a chord with the Archers – having now seen first-hand its impact.

“I got strength from what Kylee went through, how strong she was, I was just riding a push bike with my legs hurting a bit – it was nothing. That’s what I always had in the back of my mind.”

The Archers’ positivity and resilience has been rewarded. Last Easter, Kylee entered remission.

She is now embarking on the long road to full recovery – knowing at times it can be a case of two steps forward, one step back.

“A lot of people think it’s a flick of the switch when you have the all-clear, ‘right, okay, back to it’ but it’s not as easy as that. We’re getting there.”

This September, Jason will be back on his bike, with Kylee along for the ride.

“It’s like ‘Driving Miss Daisy’, Kylee cruising along at 27km/hr on her electric commuter bike while I’m peddling madly behind her trying to keep up,” Jason muses.

They’ve been put through the wringer. But here they are, on the other side, still hand-in-hand.

So – this is why Jason will Cycle for Cancer. For Kylee. For his kids, Cohen, Kaitlyn, Georgia and their entire family. For them all.

With Kylee – his inspiration and driving force – by his side. Or maybe, with her electric bike, cruising out the front. Let’s go!