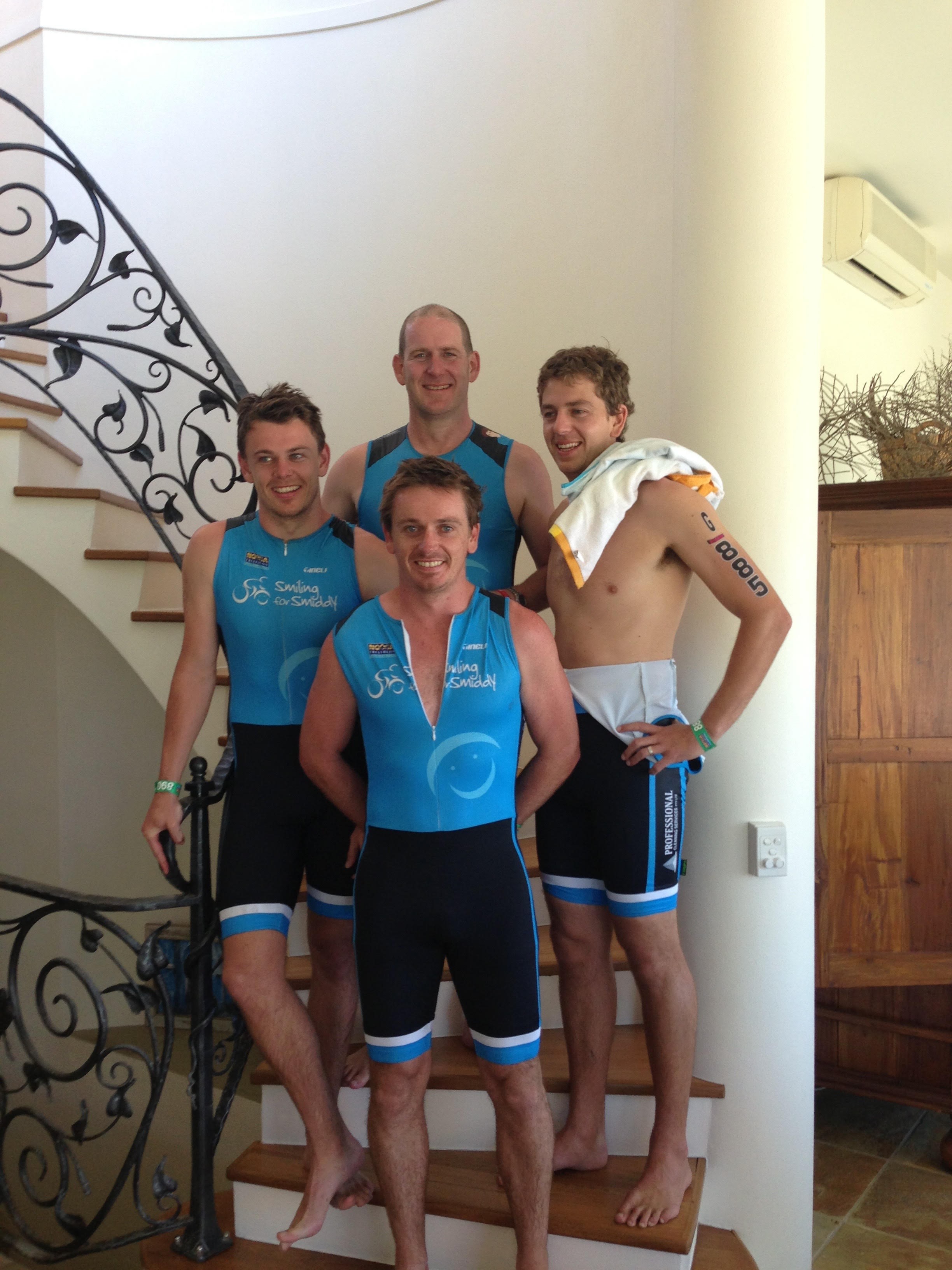 Who’d have thought Tom’s feats in lycra would become so legendary? (Who knew the zip goes at the front, anyway?!)

“Team Angus” – a family of long-time Mater Smiling for Smiddy supporters who have contributed over $250,000 to cancer research efforts since 2012 through their involvement at Noosa Tri - is fast becoming as iconic at Noosa Tri as eye-watering Asics trainers, TT bars and GU gels.

Unlikely seasoned triathletes are exactly what Tom – alongside older brothers Matty Paddy and Dave – have become in building a fundraising legacy for their late father, Mark “Angus” Burgess who died of melanoma in 2012, aged 55.

The three brothers, and their uncle Matt, have been mainstays of this extended family tradition, with up to 17 family members known to make their way to the start line at Noosa from a 50-plus strong family gathering that spans generations and includes Mark’s widow, Dierdre.

“It’s a second Christmas-style gathering for us,” Matt enthuses. “It’s taken on a life of its own.

“It’s an absolute buzz. It’s quite addictive. It’s a great charity, a great event, and a pleasure to try to raise funds for you guys – having that family aspect .

“Gradually over the years our training has gotten less and less. It’s an absolutely brutal finish for us all. That’s all part of it – if you don’t want to train, you feel the pain.”

This year’s event on October 31 falls on Mark’s birthday. He would have been 64.

“He (Mark) was one of those rare, modest, super-doer type guys,” Matt says. “A beloved general practitioner. He always made time for everyone. He made time to know what was going on in your life.

“It was devastating. It seemed like a bad nightmare, it was such a surreal experience. Just horrible for everyone in the family. I think he’d be quite proud people are still getting together in his name. He’d be really chuffed.”

Not even the cancellation of the 2020 Noosa Triathlon could stop Team Angus from gathering to honour Mark – the eldest of 10 siblings.

With COVID skittling last year’s event – the Burgess family found a silver lining – with Mark’s 92-year-old mum, Zilda, able to join the annual family gathering which they held in their native Newcastle.

For the whole family, the benefits of ongoing advances in cancer research remain very real and personal, with Mark’s sister Fiona in remission after long-term melanoma battles.

“My sister has been doing immunotherapy and various treatments with (Professor) Georgina Long,” Matt says. “The current treatments are mind-boggling for us. Without doubt my sister wouldn’t be alive today without the advances that have been made in research and treatment.”

Unfortunately, 2021 with ongoing border closures, may see some of the Team Angus ranks taking on their own version of Noosa Tri – but it won’t stop them honouring the memory of beloved ‘Angus’ and continuing their fight for better outcomes for Melanoma patients.